Maybe Scorsese´s most famous effort, and his big breakthrough: De Niro portrays Travis Bickle, a war-veteran, who is lost in the streets of New York. Haunted by depression, loneliness and growing paranoia, he starts an almost missionary cruisade to „clean the streets of the scum“.

„Taxi Driver“ is the portrait of a deeply disturbed human being, and the film that made De Niro a star. It´s best known for it´s shocking finale. Also, it marks the first collaboration between Martin Scorsese and screenwriter Paul Schrader.

quote: „You talkin´to me?!“ Travis Bickle

The ultimate Mafia-film: The second of Scorseses Mafia-films became his most famous one: Unbeaten in pace and directing, GoodFellas shows us 3 decades of the life in a mobster gang. There is no other film that has achieved capturing this tempting but dangerous lifestyle as good as this one. 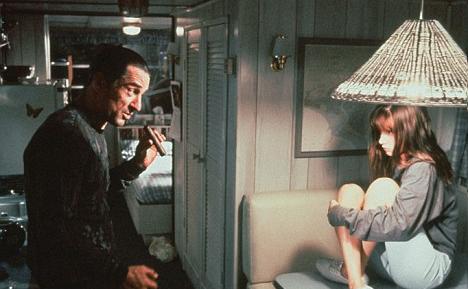 An underrated masterpiece: „Cape Fear“ is the brilliant remake of a 60´s-B-Movie, that takes the original plot – and adds intensity and gripping suspense.

De Niro portrays Max Cady, a convicted criminal who is discharged from his 14-year-prison-sentence. But he is not happy: He is very very angry at his former lawyer, Sam Bowden (Nick Nolte), who has supressed evidence about his client whom he saw a threat to humanity. Cady wants revenge: He wants to destroy the lawyers life as he feels his life has been destroyed.

„Cape Fear“ is a powerful thriller, and a reflection about the „evil“. It is, at the same time, highly entertaining and a „torture“: There are not many films out there which achieve to convey a feeling of a subtle threat and suspense in such an effective and brilliant way.

quote: „You will learn about loss, counselor“ Max Cady

By some called „A second Good Fellas“, „Casino“ is much more than that: It´s true that the plot is somewhat similar to Scorsese´s sooner effort, but it is more complex and dense, especially on a psychological level.

A „big scale GoodFellas“, „Casino“ shows the rise and downfall of a bunch of Mafioso in Las Vegas, and includes a convincing cast lead by Robert De Niro, Joe Pesci, and a great Sharon Stone.

Why is this one No.1? Because „Mean Streets“ lays the groundwork of Scorsese´s later career, it contains – for the first time – all the elements of the Scorsese-cinema: Pace, his trademark, powerful aggressive-intense directing style, jump cuts, Rock music as „fuel“ of the story; guilt-driven characters in mobster-environments, and madness.

All this and more you can see in this crimson-coloured masterpiece of modern American cinema.

translation to your language: